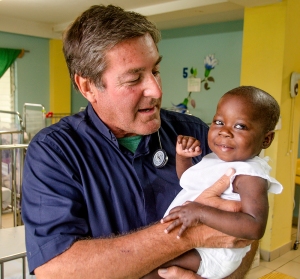 Fr. Rick Frechette, CP, DO, graduated from Assumption College in Massachusetts with degrees in math and philosophy. He next attended St. John’s University in New York and studied theology as a seminarian, and was ordained a priest in 1979. After a few years as a parish priest in Baltimore, he met Fr. William B. Wasson, founder of Nuestros Pequeños Hermanos and worked in NPH Mexico in 1983. His next calling was to Honduras to help establish a second orphanage for NPH.Mother Teresa’s Sisters of Charity in Haiti directed Fr. Rick to the next turning point in his life. The sisters were caring for babies born of dying mothers, frequently sick with AIDS. Many of the babies did not survive, but those who did needed care, love and a place to live. Fr. Wasson and Fr. Rick visited the poor country and children’s hospice and decided to open an orphanage there. Today, Nos Petits Freres et Soeurs (NPFS, French for “Our Little Brothers and Sisters”) survives amidst political chaos, economic disaster and uncontrollable crime.Fr. Rick then went on to medical school to learn how to minister to the children’s physical needs, which resulted in his medical degree in 1998 from the New York College of Osteopathic Medicine, and becoming a general practitioner. “The poor people have scant access to medical care; even if they are lucky enough to get evaluated at a clinic, both scarcity of medicines and their relatively high prices prevent their getting treatment. Our own working conditions, especially in the poorest areas of Port-au-Prince, are tragic and deplorable. We have little water, no electricity, and few medicines or supplies,” states the doctor-priest.Frechette’s duties include overseeing NPH Haiti’s St. Damien 150-bed pediatric hospital, which provides long-term care to critically ill children and outpatient services to over 80,000 children and adults each year. Also Fr. Rick oversees the management and operations of the NPH orphanages called St. Helene and Fr. Wasson Angels of Light, which serve over 2,000 children. He also founded the St. Luke Foundation which creates dignified jobs in social service fields including 29 street schools, water delivery to the slums, hospitals and clinics and burying the unclaimed dead from the city morgue.Fr. Rick is the National Director of NPH Haiti, overseeing an extensive array of programs, serves as the Medical Director of NPH International and is a member of the NPH International Board. In 2012, Fr. Rick won the Opus Prize, a faith based humanitarian award that recognizes unsung heroes solving today’s most persistent social problems.Photo credit: Giles Ashford 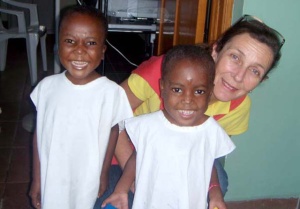 Pilar Silverman, MD, graduated from the School of Medicine Hospital de Santa Cruz y San Pablo in Barcelona, Spain in 1981. After working many years as a family physician in the public health system, she began her own practice in Madrid. After moving to the United States in 1998, she volunteered in several NGOs such as Camillus House, Red Cross and founded her own NGO with three other physicians called MMC (Mision Medica Catolica). MMC provides medical brigades to serve the poor in Guatemala, Ecuador and Panama.

Dr. Pilar also attended continuing studies related to aid to developing countries and is completing her Masters in Public Health. After being involved as a board member and then chair of the board of Friends of the Orphans in Florida, she also became a member of the Friends of the Orphans National board. In 2008, Dr. Pilar joined the NPHI Medical Service Team as Executive Director of Medical Services. She currently lives in the Dominican Republic and additionally is the Regional Medical Coordinator of NPH Dominican Republic and NPH Haiti. Dr. Pilar also serves on the NPHI Leadership Board, has been married for over 30 years and has four sons. 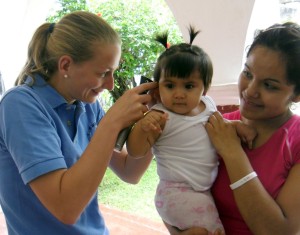 Corinna Lawrenz, MD, graduated from University of Bonn School of Medicine in Germany in 2009. She worked as physician volunteer in NPH Guatemala from July 2010-July 2011. Afterwards, Dr. Corinna joined the NPHI Medical Services Team as Regional Medical Coordinator for Mexico and Bolivia. Simulteaneously she is completing her specialty in Pediatrics at Städtisches Klinikum Solingen, a public hospital in Solingen, Germany. 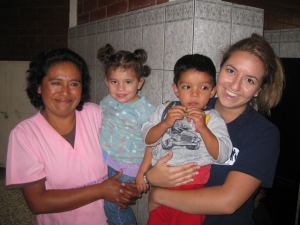 Marta Garate is a licensed nurse from San Pablo CEU University in Madrid, Spain. She graduated in 2007 and continued with a Masters in Emergency Intervention. In 2010, Marta volunteered at NPH Honduras working in the internal, external clinic and in the Holy Family Surgery Center. After finishing her volunteer year, Marta joined the NPHI Medical Services Team as the Regional Medical Coordinator for Guatemala, Honduras and Peru, on a part-time basis. Marta currently lives and works in Madrid as a surgical room nurse when not in the NPH homes.

Julia Spettel is a licensed pediatric nurse from the main pediatric hospital in Salzburg, Austria. She gradtuated in 2010 and then worked in Salzburg and Vienna for a couple of years on pediatric infection wards before she worked from 2013 to 2014 as a volunteer nurse at NPH Peru. Since 2015, she has worked at NPH Mexico and also in the clinic, doing prevention work, before accepting the RMC position for Nicaragua and El Salvador.

Nelly Fernandez is currently the Mental and Reproductive Health Coordinator for NPH International and supports both the Family Service team and Medical Service team on a part-time basis. She works toward attaining the teams’ mutual goals within the themes of health and childcare for all of our homes. 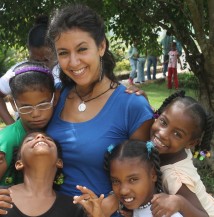 Upon arriving at NPH in July 2011, Nelly has played an integral role in the homes. She began her work with NPH as a volunteer Art/Play Therapist in the Dominican Republic home and then became the House Director in May 2012. In October 2013, Nelly began working as part of the Family Services staff as well as the Volunteer Coordinator in NPH Peru.

Nelly is originally from Spain, where she received her master’s in psychology then continued studying to receive her postgraduate degree in education. She moved to Scotland in 2004, where she was certified in early education and child care, and specialized in play therapy, neurolinguistic programming, and community development and health.

With extensive experience in various non-governmental organizations, Nelly has worked with children, adolescents, adults, and people with special needs as a therapist, teacher, support worker and trainer. She also has experience developing and implementing community health projects.

She currently resides in Scotland and travels regularly to the NPH homes. Nelly shares what she loves most about her job, “I enjoy working with children and young people. They inspire me every day. I love the fact that I am able to contribute to the development of a happier and healthier person, so that they can reach and enjoy their full potential.”